MPPT means Maximum Power Point Tracking. It’s the point at which a solar PV (Photovoltaic) panel is at it’s maximum power. Some solar charge controllers have the electronic ability to find/track this point which is why they are called MPPT Charge controllers. Often referred to as the panel’s sweat spot, it’s where we ideally want our panel to be working (producing power) for optimum performance.

The maximum power point isn’t always the ideal voltage for a solar powered system especially if it’s a battery based off grid installation. So this clever bit of electronics in an MPPT controller which changes the output voltage is very useful.

The MPP (Maximum power point) curve of a solar panel is knee shaped and the point at which the power is at it’s maximum is where the voltage times the current gives the best output (Measured in Watts). The above diagram illustrates this using three example points a,b and c 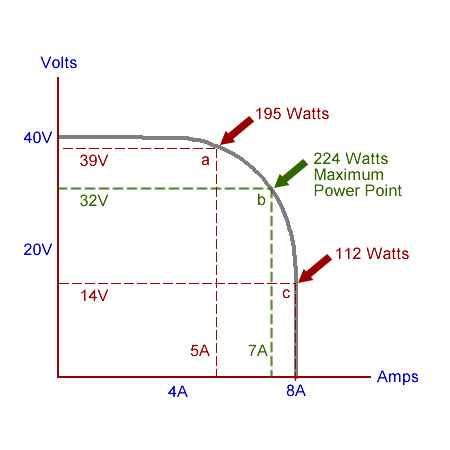 The voltage of a solar panel (each solar cell) also varies with temperature and the amount of sunshine falling on it so the maximum power point moves. Having a charge controller that tracks this point can be very advantageous. MPPT Charge controllers are also very useful when charging 12 or 24 volt battery banks using high voltage solar PV Panels.

Some words of caution. Don’t exceed the maximum input voltage or you will destroy an MPPT charge controller. Make sure you calculate the absolute maximum output voltage at the lowest recorded temperature for your location. A solar panel that produces 28 volts at 25 degrees could produce 38 Volts at minus 5 degrees. That’s OK if you only have one panel but if you have 3 or 4 in series you might blow it up! You have been warned 🙂

This website uses cookies to improve your experience while you navigate through the website. Out of these, the cookies that are categorized as necessary are stored on your browser as they are essential for the working of basic functionalities of the website. We also use third-party cookies that help us analyze and understand how you use this website. These cookies will be stored in your browser only with your consent. You also have the option to opt-out of these cookies. But opting out of some of these cookies may affect your browsing experience.
Necessary Always Enabled

Any cookies that may not be particularly necessary for the website to function and is used specifically to collect user personal data via analytics, ads, other embedded contents are termed as non-necessary cookies. It is mandatory to procure user consent prior to running these cookies on your website.